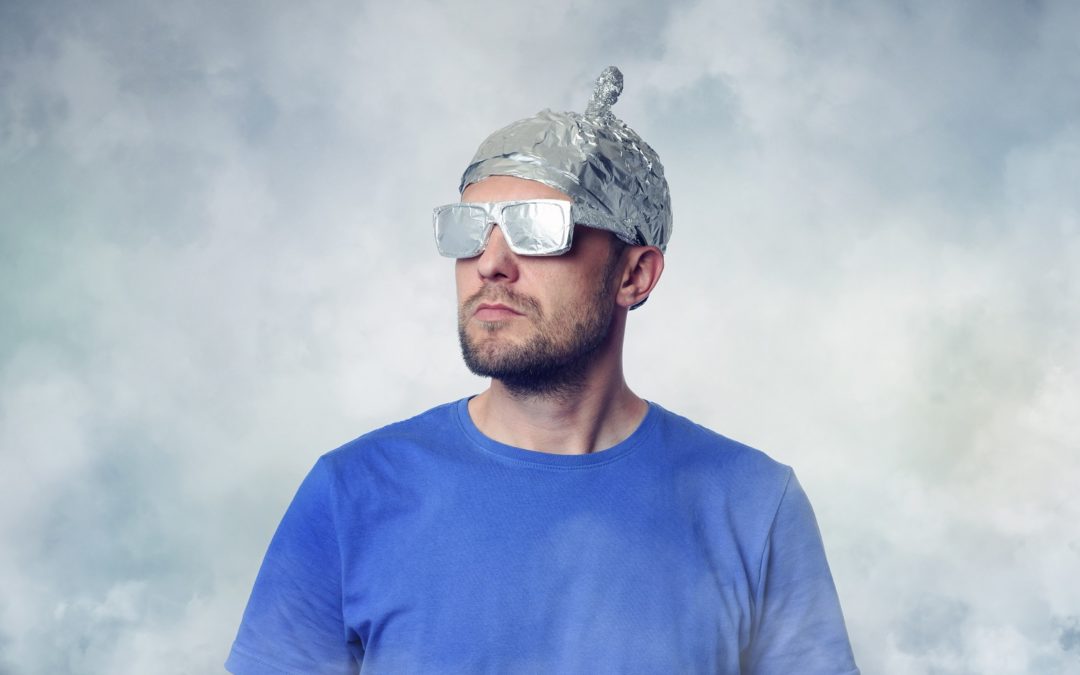 I’m scrolling through my Twitter feed when I get a text from a friend. I don’t even have to open the text to know what it is – a link to an article taking me down the rabbit hole of corona-conspiracy.

Now, I must admit that in conspiracy land – if I’m not the president – I am at least a ranking cabinet member. I can even tell you how the term conspiracy theorist was devised by the CIA in order to discredit individuals. (BTW, it’s an intentional misnomer.)

Because you see, more than often today’s conspiracies become tomorrow’s facts. They are just hidden deep down in the newspaper, so you don’t notice the change of narrative.

I have always been interested in conspiracies, in a good mystery, and for ample reason.  I think the main one is that I am a product of a generation that was raised in relativism, that there is no such thing as absolute truth.

I am not saying that I believe that, but you cannot bring up a people telling them that there are no absolutes and then wonder why no one wants to believe the mainstream rhetoric.  The other reason I find conspiracy theories intriguing and do not dismiss them right away is that my generation was also taught to be wary of authority.

And then the government…

We learned of all the evils and wrongs that our government had done, from the treatment of Native Americans to the Tuskegee experiments to Ruby Ridge and Waco.

A strong distrust of government was an underline theme in my childhood. Take that all that and mix in the real-life experience of seeing what my father went through and how the government mistreated and broke promises to him and you can start to understand where the cynical conspiracy theorist mind comes from.

For the record…I don’t believe the earth is flat.

Now, just to be clear, I do not buy into all conspiracies. I do not think the earth is flat, I do believe we went to the moon, and I’m undecided about an evil race of reptilians using us as cattle. But people do conspire, in that we can all agree.

Throughout the course of history, people, especially in politics, have conspired together to achieve their own plans, be it for good or evil.

I do not think I am alone in this feeling either. I am talking to many people who have never entertained a conspiracy in their lives who are now shaking their heads. None of this makes any sense. I don’t know what to believe or who I am supposed to listen to when it comes to this pandemic.

It seems one news organization has all the charts and facts to back up their narrative, and another news agency has a completely different set of facts and charts for theirs. When I scroll through Facebook, I have all kinds of graphs, charts, and supposed doctors tell me why it is or isn’t safe to go out.

Some politicians and celebrities and working hard to convince us that we should lock ourselves in our houses until there are warehouses of vaccines ready, while others want us to storm the beaches and malls and demand that we open everything up. And this is where we have the problem.

You see, conspiracies by their nature are things that are hidden.  So, in order to uncover a conspiracy, one must dig, one must search for the truth.  Unfortunately, this means more than watching a YouTube documentary or reading a post and sharing it.

That is not, as the kids say, woke.

To uncover and understand a conspiracy you really must research and connect dots, you must find the primary documents, correct quotes, and double-check every little fact.

Sadly, I do not think many of us know how to do research anymore, and I think many of us are looking for confirmation that we are right. And that’s a problem with most “conspiracists” these days.

These are not people looking for truth and doing real research. These are people trying to get clicks on their social platforms. And as my father taught me, if you want to find the truth you need to follow the money. Also, the nature of the internet further muddies everything. It is said that around 60% of millennials get their news from social media. In doing so we activate algorithms that bring stories and videos to our feeds.

Russian and Chinese Bots Are Real!

We then pick the stories, articles, and videos we like and toss out the ones we don’t and the algorithm notices our preferences and fits our feeds accordingly, regularly at the cost of balance and accuracy. Then we also have to worry about the army of bots (yes, there are really Russian and Chinese bots) out there with the only purpose of flooding sites with false stories and misinformation to cause further division.

These were not issues someone doing research in the 70s and 80s had to worry about and I didn’t even bring up Deep Fake Videos (these really are crazy times!).

Anyway, back to the other night.

So, there I am going through my twitter feed and taking in all the government-is-trying-kill-us-all-and-initiate-a-1-world-order when my friend sent me a text.  I checked it and sure enough, it was a link to an article that had read earlier (this one was about some weird artist that was now being promoted on a Microsoft commercial).  I sent out a reply and put my phone down.  Then I did something that we all need to be doing more of, I picked up my Bible.

And as I sometimes do when I am not reading anything, in particular, I just let the pages fall where they may.  The pages fell to Isaiah, which is not that weird as it is somewhat in the middle of the Bible and so there is a good chance that it would up there.

And for the people of Jerusalem he will be a trap and a snare. Many of them will stumble; they will fall and be broken, they will be snared and captured. Bind up this testimony of warning and seal up God’s instruction among my disciples. I will wait for the Lord, who is hiding his face from the descendants of Jacob. I will put my trust in him.”

I have to admit that I was a little taken back.

Now, I have read scripture before when it seemed to be speaking directly to me, but this was like a spotlight. After I read to verse 17 I stopped and went back to 12 and reread it! What was God telling me?

Was God saying that the official narrative of the Corona Virus was the correct one and not to question it? Was God telling me to stay away from all the YouTube videos?  Did I have to delete my twitter account and repent for all the conspiracy theories I had liked and retweeted?

No, I think it was much simpler and a lesson that we all need currently. If we are in Christ then what else matters? God was not telling me to not look for the truth or to blindly follow whatever narrative is given, but instead to remember that He and He alone is in charge.

“Do not fear what they fear and do not dread it.”

Does it change who God is whether COVID-19 is a naturally occurring strand of Corona or if was made in a lab? Does my relationship with God change if I am required to social distance and wear a mask? Obviously not!

Time to listen to the Voice of Truth

God was telling me something amazingly simple but was hard for me to hear. I have been putting far too much time and worry into things that do not matter, things that were unnecessarily causing me to worry and anxiety. For many of us, these are unprecedented times, but not so for God or God’s Word.

As his people, we need to get first get back into His Word and pray for wisdom and discernment as we move forward. Do the things I say or share promote God or spread fear?  Are the things I share to bring people to the Truth (God’s Truth, the one and only), or was I too lazy to check the facts of what I just read? Do the things I say foster unity among God’s people or is it causing division and fighting?

As followers of Christ, as God’s people, we are to be focused on Him and Him alone. We are to seek Him first and fear Him only. There will come a time when what is hidden will be revealed and what is done in the dark will be brought into the light. And it will be the glory of God that exposes these things! But for us, we are to put our energy on focus on His work and the work of His kingdom.