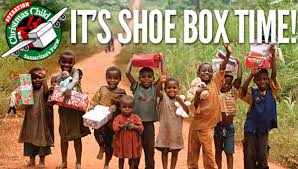 Operation Christmas Child began in 1990 when a father of four from Wales, David Cooke, witnessed abandoned children in Romanian orphanages on the news.

Cooke was so moved by what he saw that he asked friends to help fill a truck with toys that he would then drive to Romania. Between his friends and local residents 60,000 euros were raised, and Operation Christmas Child was established as a charity.

The charity continued to grow throughout Eastern Europe. In 1995, it merged with Samaritan’s Purse and shoeboxes became part of the operation. Samaritan’s Purse launched Operation Christmas Child into a global endeavor.

By 2012, over 100 million shoeboxes were delivered, and last year 11.4 million were sent from countries all over the world to suffering children.

Operation Christmas Child is about more than giving underprivileged children presents, it holds the possibility of changing a child’s life by bringing them to Jesus.

Such a simple gift can have an eternal impact. So please, take the time to fill a shoebox or bring goodies so we can fill them up at church!

Operation Christmas Child runs from November 12th through the 19th. Read about what you can and cannot put in the boxes here: How to Pack a Shoebox