What Are the Lost Books of the Bible?

Do the “Lost Books” Prove an Altered Bible?

When those who are against us cannot destroy what we have through reasonable arguments or debate, they throw doubt on our faith like water on a fire. Not so easily done for those of us with a firm grasp of God’s Word. Thus, that is where they attack. “Your Bible isn’t complete – it has missing information.” 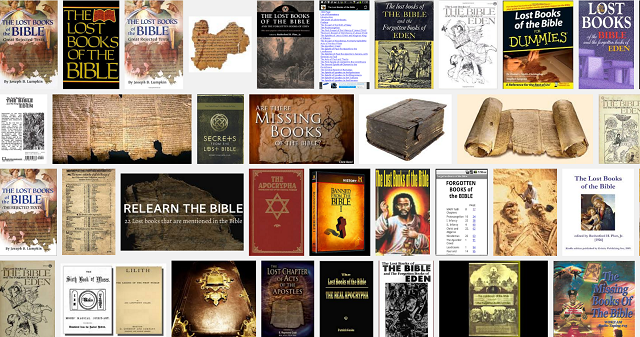 This is said as if to help us understand it better, but the truth is simply that it’s an often effective way to squeeze doubt into our lives.
The draw of this idea is that it opens the door for them to question everything we believe, and then cause us to question our own faith.
They might claim that the Bible was edited to take out reincarnation or the teaching of higher planes of existence or different gods or ancestor worship or “at-one-ment” with nature. One way or another, they say we just don’t have the full picture.

The reason people bring these books up are because of the Catholic’s use of them. The problem is that the bible was considered essentially locked for a whopping 1300 years after Christ’s death and resurrection.
These books were never even considered to be any part of God’s inspired Word. However, when Martin Luther nailed his 99 theses to the door of the Church at Wittenburg demanding the Church recant its sinful expectations of God’s people, those in power over the church (and most governments at the time) rebuffed his plea. And the Reformation was born alongside the Protestant movement. Both spread like wildfire.
In response to this sudden loss of obedient members, the Catholic Church decided they needed something special to attract their lost parishioners. They added seven of these illegitimate books at the Council of Trent in 1546. Essentially, the whole purpose being, “We have something you don’t have.”
Remember that, these books weren’t thought to be authoritative, or even valuable in any way, until this point (with the minor exception of Augustine in 400 AD).

These are counterfeit or pseudonymous writings, usually Jewish writings ascribed to various biblical patriarchs and prophets. They were composed from 200 BC to 200 AD.
These were written in Hebrew, Greek and Aramaic and are often apocalyptic, or are legendary histories.
In this collection there are plenty of books about Adam and Eve, and Abraham, four books on Enoch, quite a few apocalyptic books.
Except for the conspiracy theorists, no theologian has ever thought them authoritative or historical for that matter. There is nothing really here worth studying unless you like fantasy stories.

The “Gospel” of Thomas and More

Finally, let me discuss the gospel of Thomas and books of that genre. Many claim Thomas tells of Jesus’ early years, whereas, the Gospel of Thomas is a forgery from the 3rd or 4th century AD, yet it claims to have been written by the Apostle Thomas.
It is easy to see he didn’t write it because the theology and understanding of Jesus is different than anything in the New Testament.
The early church fathers almost universally rejected this book as being heretical, which is why it is so dangerous today.
It teaches many things that Jesus supposedly said or did – yet it doesn’t match up with the life of Christ we see in the New Testament. None of it or almost none of it is true.
There are other books like the Epistle of Barnabas, the Gospel of Philip, and the Apocalypse of Peter that were supposedly written by the apostles yet the same problems arise.

When it comes down to it, the Apocrypha and the Pseudepigrapha look nothing like any other books we see in the Bible that we have.
We have all of the books God intended for us to have. The 66 (39 OT and 27 NT) we have were almost universally accepted for 1500 years when a few OT books were added to the Catholic and Orthodox Bibles.
We believe these other books to be fantasy, historical, wisdom, or legendary stories but they aren’t God breathed.

So take heart, your Bible is perfect.